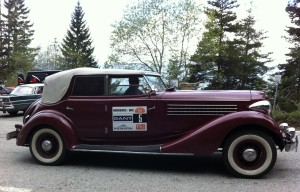 Hans van de Weerd of the Netherlands took his Auburn on an amazing trip in May of 2013. The result his efforts in the 60th International Historic Tulpenrallye is 7th place in the Vintage Class. There may have been nearly as much excitement getting ready as during the trip itself and the stately red 1935 851, the first Auburn ever to compete in the Tulpenrallye, had only 100 miles to prove it road worthy before the start.

The eldest, largest and most well-known event for classic cars in the Netherlands offers a competitive challenge for the participating cars and their crews. Normally it starts somewhere in France and ends in Noordwijk Netherland. The rally has a long history with this famous Dutch beach town and his most famous prestige Hotel: “Huis ter Duin”. Because of the 60th jubilee of the rally, the organization choose to turn it around: Starting at Noordwijk and finishing after 1500 challenging miles in another famous town at the border of the Mediterranean in Nice, France.

During the days the crews compete to find the right routes and to pass the correct time controls at the right time. One must keep the car in motion and the Auburn tested the resourcefulness of the crew with coolant and pump pressure problems and a repair to the brakes.

After each day of driving, dinner meals were organized for the participants in the picturesque towns along the way. The emphasis of the Tulpenrallye in 2013 was on driving beautiful routes, with a balance between map reading instructions and the time schedule. Crossing the finish line at the Boulevard des Anglais in Nice in the South of France, to the applause of the watching crowd made the 1500 mile trip worth the ride and a reason to smile.

See Tulpenrallye for more information about this prestigious event. 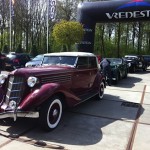 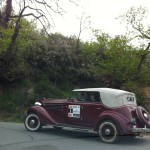 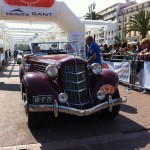 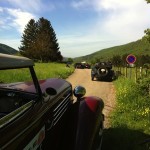 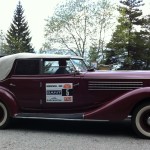 160 thoughts on “Auburn at The Netherlands Tulpen Rally”