In 1934 the 8 cylinder engine was introduced with a water side plate cover. This plate and the core plugs to follow were used to extract the sand from the casting. The side plate style of block ran to sometime early to mid 1935, when at which time the factory introduced a 3 large core plug block in what must have been a fairly short run. Next a 5 core plug block was introduced; with 3 large and 2 small plugs. It also had additional bosses and casting that facilitated moving the supercharger to the right side of the engine, with the intent of a conversion from left to right in the future. [Changes to this paragraph 5/16/18]

All engine block assemblies carry part # A90458.  No other part number has been found for designation of the various types of block.
Five freeze plug engines were superseded by a 3 freeze plug variety which ran until the end of production in 1936, making these rare. 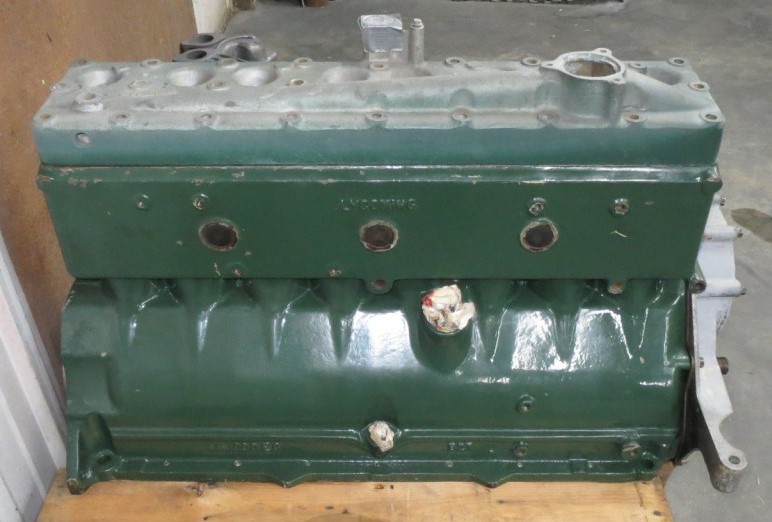 The first line of a data plate indicates the Model

1936 6 cylinder is 654
The second line is the Serial Number which is a numerical code followed by an alphabetical suffix.

The third line of Data plate is Engine number: a combination of alphabetical indicator and number.

The alpha-plus-number is found hand stamped onto a boss located on the left front top of the engine.

In 1934 the 8 cyl engine had a water side plate cover, used to extract the sand from the casting. This style of block ran to sometime mid to late 1935, when 5 freeze plugs blocks were introduced.

All engine block assemblies carry part # A90458. No other part number has been found for designation of the various types of block.

Five freeze plug engines were superseded by a 3 freeze plug variety which ran until the end of production in 1936, making these rare.

There are no known 6 cyl 3 freeze plug engines and no change in part number.

Engines A90537 were manufactured in the same three styles as the 8 cyl above.

Most differences between supercharged and non-supercharged engines are internal and not covered here.

Details of the supercharged engine internal differences can be found at:

There are two external identifiers. One is the engine serial number begins with GH. The other is a hole on the bottom of the left side of the block, slightly forward of center, that is for an oil drain back tube fitting. 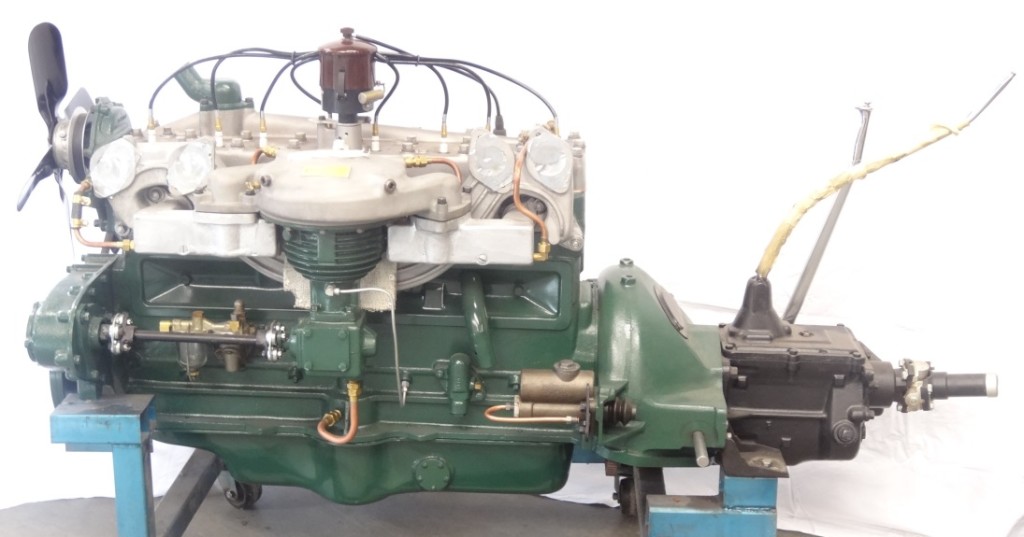 UPDATE NOTE – Since this engine was restored it has become known that the superchargers were delivered to Auburn by Switzer Cummins painted black. Auburn did not repaint them green. All superchargers should be black on the green engine.

All 6 and 8 cylinder engines left the factory a dark green.

If an 8 cylinder was returned for rebuild, typically called a Dallas Windslow rebuild engine, they were painted battleship gray.
If a 6 cylinder was rebuilt, it was painted a dark turquoise.
Any of the three colors are acceptable.

When the engine was painted at the factory it included the following items, already in place:

This means all the gaskets, bolts, and washers that secured these items were painted at the same time.

Note: All superchargers came from Switzer Cummins painted black. This site has them mostly painted green in the pictures because we continue to learn as we go.

Oil level gage A90244 can be gray, black, green or cad plated. How it came originally is up for discussion. 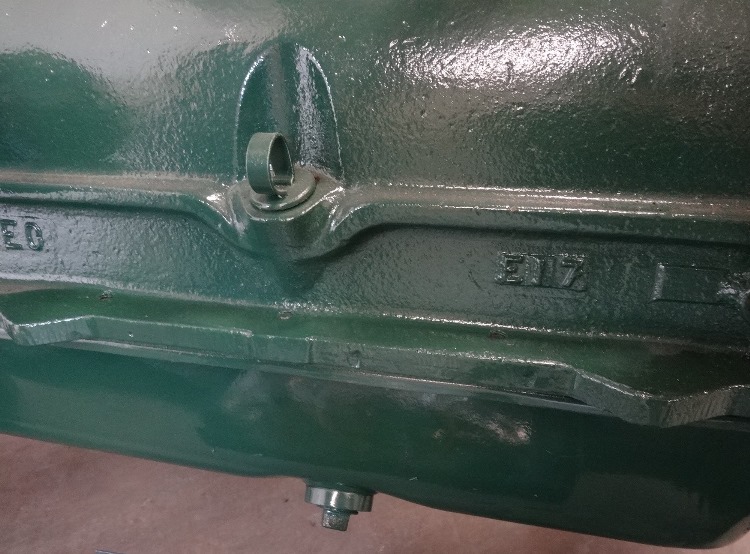 These are the same on all cars, body styles and engine types.

Cap and tube were supplied by an outside vendor and received painted black. The caps have been black or cadmium plated.

They were inserted in the engine block when it was painted. It is believe that these left the factory engine green, but the black is found under the green over time.

For now in judging green or black are both acceptable. 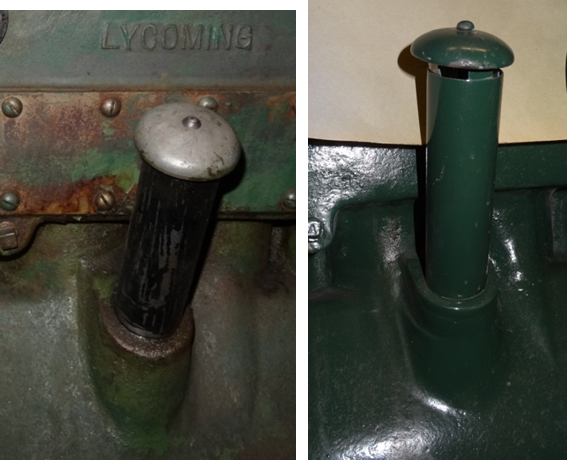 There are four upper and four lower motor mounts.

First, the engine mount spacer A90380 must be bolted to the front of the engine.

Next the two rear motor mount brackets A10101, must be secured by six SF708 bolts and lock washers WA7 to each side of the rear of the bell housing.

Now that this hardware is bolted to the block, which is swinging in your cherry picker, we can move to the motor mounts.

Start with the four A10113 uppers in first, putting them in the frame cup-holders. Set the engine down at the rear first, lining up the holes with aligning punches. Place 2 large washers A10104 on top of the front rubber A10113, then lower the engine.

Now for the rear, take two A10103 bolts (shorter) and drop on washer WE10, then lower rubber insulator A10115 or A10116. See NOTE below. Push up from the bottom through the aligned rear mounting holes. Start the castle nut NK8, but do not tighten yet.

NOTE: Rubber insulator A10115 or A10116 must be put on the bolt so the stepped part goes into the frame.

Go to the front with two bolts A10102 (longer), add washer WE10. The next part on is insulator A10115 or A10116. Push up from the bottom through the aligned front mounting holes. Start the castle nut NK8, but do not tighten yet. And see NOTE above.

Begin to tighten all the nuts. When done, add cotter pin PE308 to each. 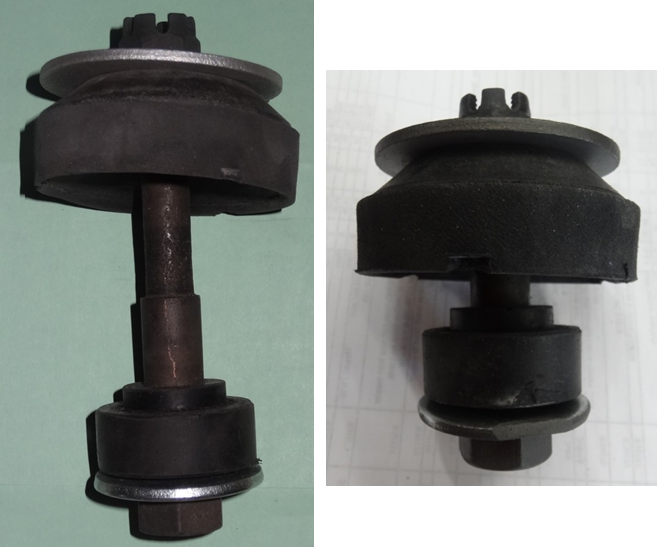 RESTORATION TIP  Prior to engine installation:

This is all the same as non-supercharged, except for the left front motor mount bolt. The same long bolt is on the right hand side and this and the rears are in, but loose.

Bolt for left front mount A10136 (short) has a hole drilled sideways through the head. The bolt screws directly into the timing chain cover and should be the first one you start to thread. There is no nut or cotter pin on this bolt.  Be cautious not to cross thread!

When all the mounting bolts are secure, go to the left front and using mechanics wire through the bolt head, extend it to a hole in the frame for this purpose.

The two styles of plugs below are  installed on the engine at the time it is painted.

There is a 1/4 inch npt plug on the right side of the engine, square head cylinder water drain, the head embossed A. This functions as a block drain. There is NO drain cock in this location. 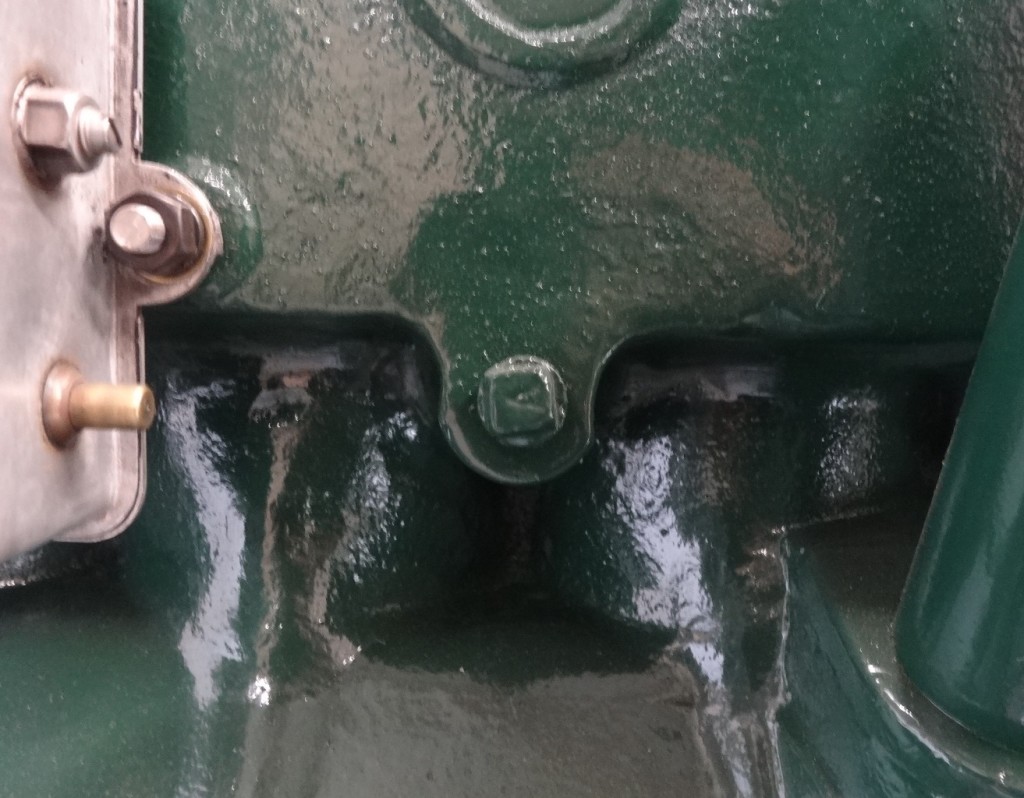 These plates can be installed in 4 different ways, and only one is correct. 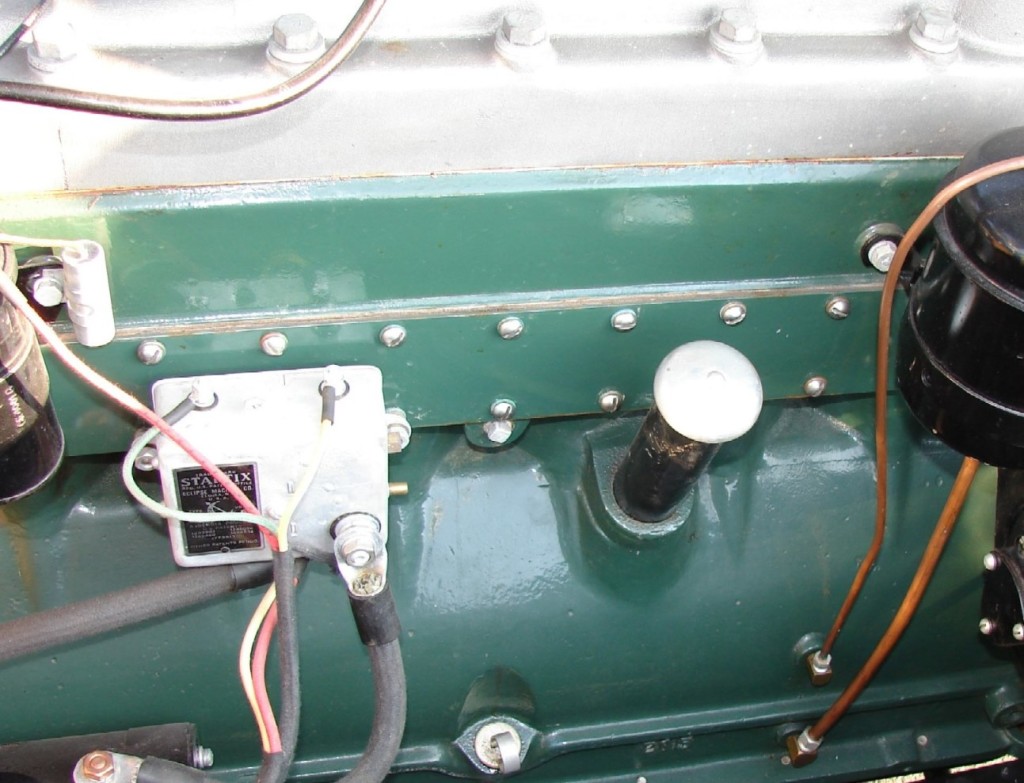 There are two PF6 3/8″ npt square head pipe plugs marked A in the cylinder head. The front PF6 is next to the thermostat housing and used as an air bleed when filling the engine with coolant. The rear PF6 plug orifice is used for the supercharger heater line if applicable or in some instances if a cabin heater is installed with this as the hot water input.

Water outlet / thermostat housings A1-233 are the same for all cars. Held in place with three SA508 cap screws, typically marked W, lock washers and gasket A1-119. These are dark Parkerized, like the head bolts.

All Champion spark plugs from 1934 up through 1947 had two ribs and are called beer bottle style plugs.  These are the most desirable because they came in the cars. After 1947 Champion plugs had five ribs. All had a black or gun blued base. Spark plugs with cadmium bases are 1956 and later and not correct for Auburn.

On top of the spark plug is a brass top K10328, about an inch high with a hex shape on one end which screws onto the plug and wires press into this.  All 6 cyl, 8 cyl cars had this and they are natural brass.

Wires are all black lacquer.

There are two rubber rings or loops K10350 that hold the wires together in groups on all cars.

The flywheel 8 cyl A90299 and 6 cyl A90472 are interchangeable except that the timing mark location differs.

The flywheel housings are not the same between 6 & 8 and left & right hand drive.

None of these are interchangeable.

Both covers are interchangeable for all models and body styles, 8 cyl and 6 cyl.

The auxiliary drive inspection cover A90548 has a gasket with no known part number. 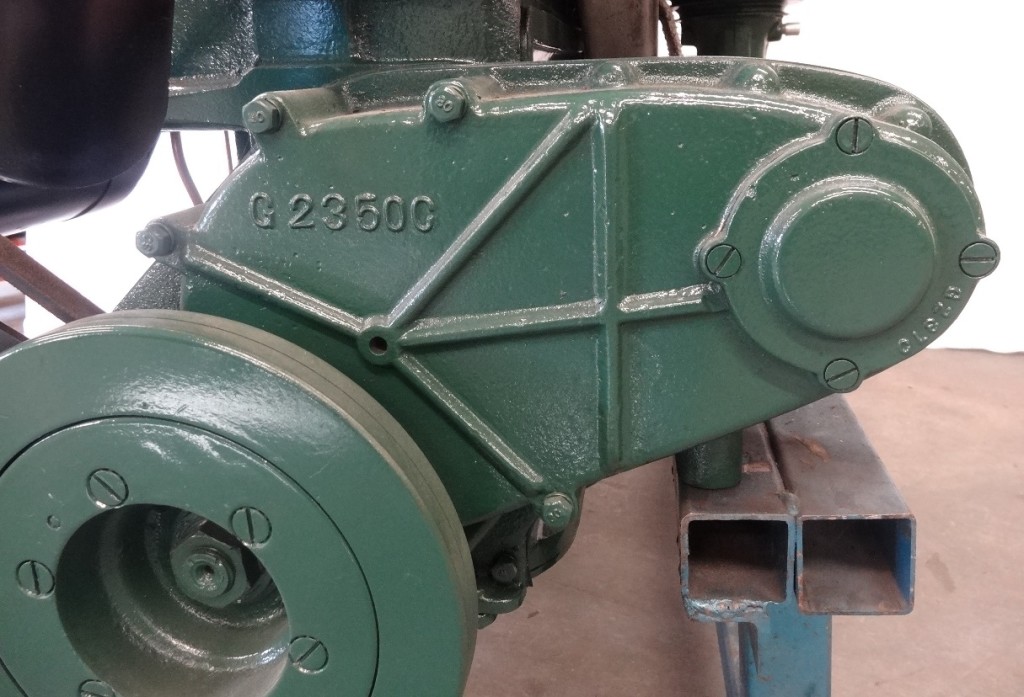 Dampener assembly A90459 is the same for 6 cyl and 8 cyl. It has accommodation for two V-belts. Secured to crankshaft with WZ9023 flat washer and NH16 Nut.

A90562 is shorter and accommodates one V-Belt. Secured to crankshaft with WZ9023 flat washer and NH16 Nut.

Intake and exhaust manifold: we have found green paint on the intake, but never any on the exhaust for obvious reasons. It is possible that these were painted off the engine together or possible they were painted on the engine as an assembly. This would mean the studs, nuts and lock washers would all have evidence of green paint, but we have not found that.

RESTORATION TIP: Knowing that the paint will burn off the exhaust manifold, I would suggest a ceramic coating that takes on the appearance of cast iron. Various companies provide this.

For purposes of discussion we will consider the intake and exhaust manifold together as one part.

The heater valve or heat riser will be covered later.

850X used a Swan manifold A90302 for the exhaust and A90416 for intake. This combination would interchange with other 8 cylinder engines as well.

There are two WZ9010 plate washers used on the two top center studs on both 6 cy and 8 cyl.